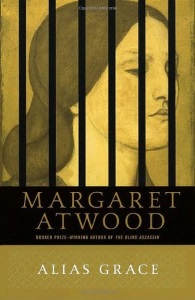 – Excellent book! Everyone should read it.

Excuse me a moment.  I may start fan-girling without notice.  This post will be quote heavy.  Also while I won’t be giving away details of the plot or the actual conclusion, I do talk a lot more about what happens in the book than I usually do in a review.  Consider yourselves forewarned!

I have a deep and abiding love for books by Ms. Atwood.  She is a vibrant voice for women, humanity and the human condition.  I’m most familiar with her works of speculative fiction which are kinda, sorta dystopian but with much more reality mixed in than most are comfortable with.  She has a way of driving down into the heart of an idea and cutting it open for all the world to see. What is being laid bare in Alias Grace?  It is social commentary and murder mystery in one package. The book is a fictionalized version of the notorious Grace Marks, who was convicted in 1843 of the murder of Thomas Kinnear.  Here’s the description from Goodreads:

Grace Marks has been convicted for her involvement in the vicious murders of her employer, Thomas Kinnear, and Nancy Montgomery, his housekeeper and mistress. Some believe Grace is innocent; others think her evil or insane. Now serving a life sentence, Grace claims to have no memory of the murders.

Dr. Simon Jordan, an up-and-coming expert in the burgeoning field of mental illness, is engaged by a group of reformers and spiritualists who seek a pardon for Grace. He listens to her story while bringing her closer and closer to the day she cannot remember. What will he find in attempting to unlock her memories? Is Grace a female fiend? A bloodthirsty femme fatale? Or is she the victim of circumstances?

The primary question is, did she do it?  How involved was she? It is open to interpretation.  I have to admit I was sure of one side the first time I read it, but now on a re-read I’m not so sure anymore. Grace tells her story and it is riveting, but she is most unreliable of narrators.  Her story is heartbreaking and confusing.  One thing that muddles it is her desire to please the people she is telling her story to.  She repeatedly states that she is telling men what they want to hear.

She does this in order to manipulate them into helping her, yes, but also Grace knows that men already have a set idea in their minds about what women are.  She has to ask herself every time,  does this man she meets, who holds such power over her daily life, see her as a strumpet or an angel?  A victim or a perpetrator? Because they all come at her with their own preconceived ideas.  Grace’s supposed partner in crime sees her and any other woman as a whore in the making.  She must want him right?  Of course she does!  No does not mean no …  ever.  Maybe this is a little less so with Dr. Jordan.  He does fall into the trap of seeing women as primarily things and not necessarily as people, but he seems to do that less with Grace as time goes on.  He is forced, by listening to her story, to begin to see her as a human being and not just as a dress wearing automaton.  As a medical student he was surprised to find that women, when cut open, were for the most part the same as men. Shocking I know! In describing a woman who works as a servant in the house he lives in he says, “He regards her with disgust; a woman so porcine, and, in this weather, so distinctly sweaty, should not be permitted out in public.  She’s a libel on the entire sex.”  A woman who does not fit into the accepted model of sweet angelic temperament and well turned out figure is not fit for public notice.

When Dr. Jordan talks about Grace he mentions that sometimes he is overwhelmed by an urge to slap her.  Particularly when turns on him the “gaze of a wounded doe” or might cry, and he can’t abide by that.  He is able to discern that what he really hates is that she enjoys talking with him and is grateful for the opportunity to tell her side of the story.  “He’s coming to hate the gratitude of women. It is like being fawned on by rabbits, or like being covered with syrup; you can’t get it off.  It slows you down, and puts you at a disadvantage.” That must be awful, it requires him to be responsible to her as a human being.  Men in this book  constantly objectify women.  Quite literally.  A grateful woman is not a human, she is a quivering rabbit.  A strong woman is a pig. Neither of them are deserving of empathy.

The book also deals with the justice system, and mental health facilities of Canada in the mid-1800’s.  The conditions were horrendous.  Laughing and talking will get you 6 lashes with a cat-o’-nine-tails.  Leaving work and going to the privy (toilet) when someone else is there will get you 36 hour sin a dark cell with bread and water rations.  That’s just the start, and it’s the  gods honest truth.  The novel is, as usual for Ms. Atwood, so well researched.  Every detail lends itself to a fully realized setting.

In the end, we are only left with more questions.  We are left with Grace.  Amazing Grace who may or may not have been named after the song.  “I hope I was named after it.  I would like to be found. I would like to see.  Or to be seen.  I wonder if in the eye of God, it amounts to the same thing.  As it says in the Bible, ‘For now we see through a glass, darkly; but then face to face’. If it is face to face, there must be two looking”  For someone who just wants to be seen, we still have just a hazy outline of the most defining moment of her life. But at least we have that.

It’s been announced that this book is being made into a series for Netflix.  I can’t begin to tell you how excited I am about this! In fact, that is what made me want to re-read the book again.  I can’t recommend this book enough.  Please make the time to read it, so you can really enjoy the show when it comes out.

Song for this book:  Do What You Have To Do – Sarah McLachlan (another Canadian!)

A Group of Chonks Reviewing Books

A blog full of curiosities

Verity and Sage
My Wandering Books

a blog for story lovers

Exploring What Captivates, Inspires, and Intrigues.

Trails of Tales
booksintheskye.wordpress.com/
The Little Booknerds in the Corner

For people who look at the stars and wish

A Library In My Luggage

Submit your film, screenplay, novel, to the festival and get it showcased at the FEEDBACK Festival. Full Feedback on all entries.

Grab a drink, for this blog is snarky and full of spoilers